Tournaments Of Badminton In India

Badminton has been a part of Summer Olympics since 1992. It is now also held in Youth Olympic Games. BWF World Championships is the most prestigious tournament in Badminton where the winners emerge as world champions. It is held every year but not in the year of Olympics. Thomas & Uber Cup is a badminton team championship; Thomas Cup is for men and Uber Cup for women. The recent one was held in 2014 in Siri Fort Sports Complex in New Delhi, India.

The Badminton World Federation's ranking list is used to determine qualification for the Olympic tournament. For singles, 29 competitors are selected. For doubles, 19 pairs are selected.

The general method of selection is by ranking, though the selection process stops once all qualification positions are filled. All players or pairs from the top 16 places on that list qualify, though each National Olympic Committee can send a maximum of three players/pairs. Players and pairs ranked below that only qualify if they are the highest ranked competitor from their nation. In addition, one place in each of the singles events is awarded by the Tripartite Commission. There are also regulations on minimum representation. Each continent must have at least one player/pair. This is the highest ranked player/pair from that continent if none have qualified through the standard selection process. The host nation, if it has not already qualified two competitors, receives two slots as well, either two singles players or one pair. 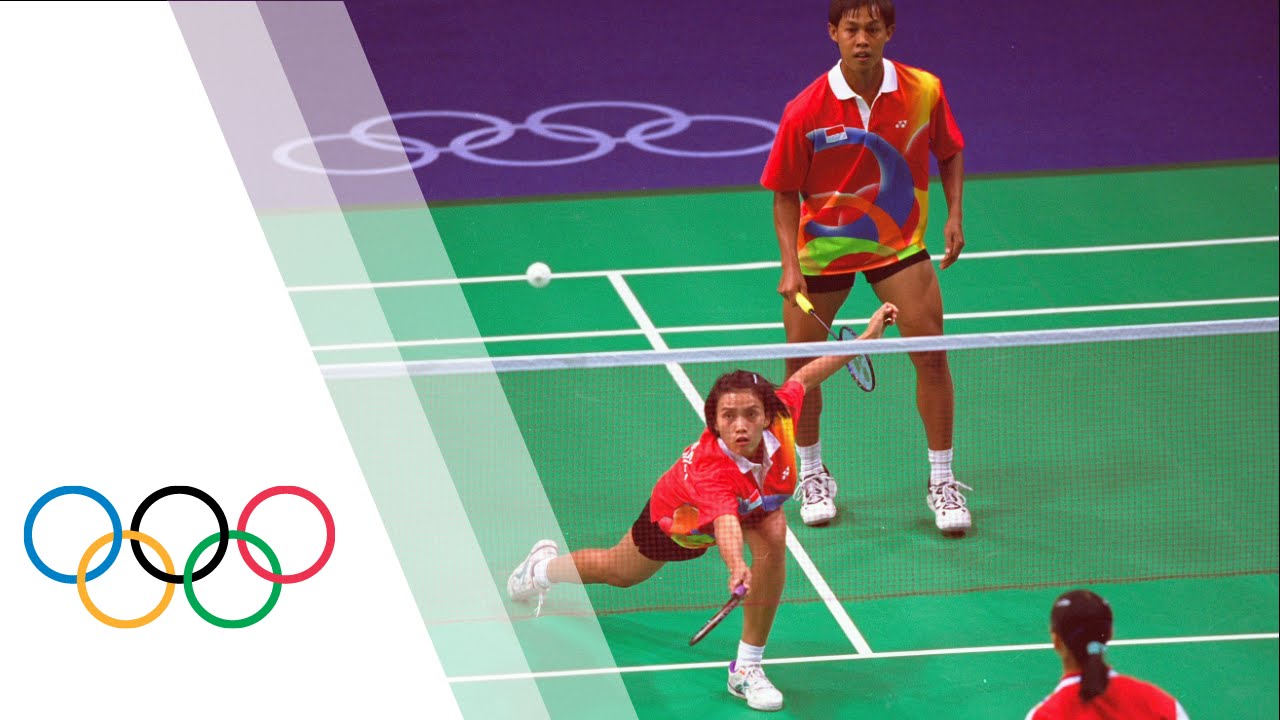 Olympic badminton consists of a single-elimination tournament. Each match is played to the best of three games. Games are to 21 points. Rally scoring is used, meaning a player does not need to be serving to score. A player must win by two points or be the first player to 30 points. 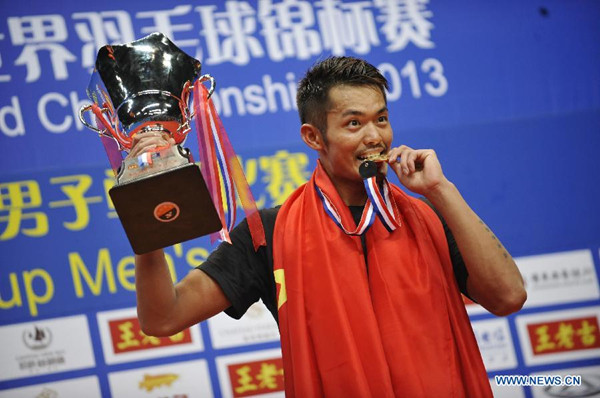 This tournament started in 1977 and was held once every three years until 1983. However, the IBF (International Badminton Federation) faced difficulty in hosting the first two events as the World Badminton Federation (which later merged with the IBF to form one badminton federation) hosted the same tournament a year after the IBF World Championships with the same goals. So from 2006, the tournament was changed to an annual event on the BWF calendar with the goal to give more chances for the players to be crowned as official "World Champions". However, the tournament will not be held once every four years to give way to the Summer Olympic Games.

The Thomas Cup, sometimes called the World Men's Team Championships, is an international badminton competition among teams representing member nations of the Badminton World Federation (BWF), the sport's global governing body. The championships have been conducted every two years since the 1982 tournament, amended from being conducted every three years.  The final phase of the tournament involves twelve teams competing at venues within a host nation and is played concurrently with the final phase of the world women's team championships.

The format of this final phase largely mirrored that of the qualifying venues. Of the twenty-eight Thomas Cup tournaments held since 1948–1949, only five nations have won the title. Indonesia is the most successful team, having won the tournament thirteen times. China, which did not begin to compete until the 1982 series, follows Indonesia with nine titles, while Malaysia has won five titles. Japan and Denmark both have one. Traditionally, the Thomas Cup had always been won by Asian countries until Denmark became the fifth nation and the first European nation in history to win the Thomas Cup after beating Indonesia 3–2 in 2016 final. The eight teams were divided into pools or groups of four. Round-robin play within each group determined first and second place group finishers who then advanced to the semifinals. Each semifinal tie pitted the top finisher in one group against the second-place finisher in the other, with the winners proceeding to the championship match.

From 2014, 16 teams were presented in the tournament. Teams no longer qualifying via the continental championships, instead, teams will be invited based on their World Ranking position. The new structure also ensured a minimum of one team from each continent and three teams from Asia and Europe will qualify. However, BWF revert to old qualifying system in 2016 tournament.

As of the 2018 championship twenty-eight teams have advanced to the final venue over the history of the Thomas Cup competition. Among them, Denmark has reached this final stage in all twenty-nine competitions. Indonesia and China have also advanced to the final stage in each competition that they have entered. Geographically, ten Asian nations have qualified to play at the final venue. Nine European nations have done so. The United States, Canada, Peru, and Mexico are the only Pan American teams to have reached this stage, and New Zealand and Australia, as one might expect, have been the only teams to represent Oceania. South Africa, Nigeria, and Algeria have qualified from the African zone

Uber Cup sometimes called the World Team Championships for Women, is a major international badminton competition contested by women's national badminton teams. First held in 1956–1957 and contested at three-year itervals. The Uber Cup is named after a former British women's badminton player, Betty Uber, who is 1950 had the idea of hosting a women's event similar to the men's. The cup follows a similar format to that of the men's competition of the Thomas Cup. As of the 2016 tournament, China is the most successful team, having won fourteen times. Japan is second, having won it five times, followed by Indonesia and United States, each with three cups.  As of 2018, 24 teams have qualified in the history of the competition for the final stages of the Uber Cup. Asia is the continent with the most teams, at ten, followed by Europe with eight. The Americas and Oceania have each had two teams that qualified, while South Africa and Mauritius are the only teams that have qualified from Africa. Uber Cup is possibly the world's "biggest" and most prestigious regularly held badminton events in terms of player and fan interest.

The Sudirman Cup is the world mixed team badminton championship which takes place every two years. It is held in the same venue for the IBF World Championships in the same year until International Badminton Federation decided to split the two tournaments starting from 2003. There are five matches in every round: men and women's singles, men and women's doubles and mixed doubles. The Cup is named after Dick Sudirman, a former Indonesian badminton player and the founder of the Badminton Association of Indonesia (PBSI). The first Sudirman Cup tournament took place in Bung Karno Stadium, Central Jakarta, Indonesia on May 24 – May 29, 1989.

There is no prize money in Sudirman Cup; players play for their respective countries and to earn BWF world ranking points and national prestige. The Sudirman Cup stands 80 cm high. It is made of 22 carats (92%) gold-plated solid silver and stands on an octagonal base made of jati wood (Java teak wood). The body of the Cup is in the form of a shuttlecock and is surmounted by a replica of the Borobudur Temple. The handles are in the shape of stamens, symbolizing the seeds of badminton 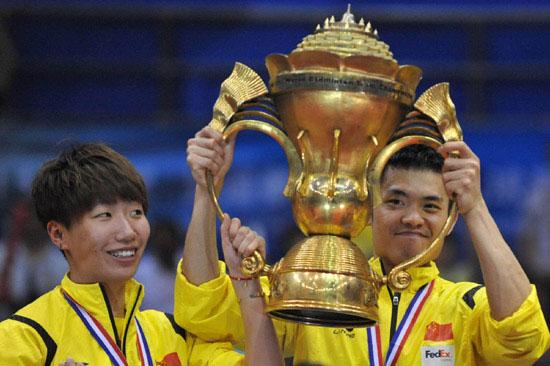 The Sudirman Cup is an international competition that does not stage a qualification round. The competing teams are divided into 7 groups based on their performances. Only teams in group 1 will have a chance to lift the trophy as the teams in other groups fight for promotion. The teams who finish last in the group will be relegated to the lower group, except the final group. The promotion-relegation system was last used in 2009 and teams competing will now group by world rankings. China is the most successful national team in the Sudirman Cup (10 victories), followed by Korea (4 victories) and Indonesia (1 victory). The Cup has never been won by a non-Asian country; Denmark is the only European country that came close to winning it, in 1999 and 2011.

These are some common badminton tournaments which are the great opportunity for those who want to show their talent to the whole world.