How To Be A Best Player Of Badminton

How to be the best player of badminton

Badminton is a fun sport and a great form of exercise. To be a knockout badminton player, you have to have lightning-fast feet, strong technique, and a cunning sense of strategy. If you already know how to play badminton but want to elevate your game, you will have to find a way to maximize your strengths and exploit your opponent's weaknesses.

This is the very important point. When you play a game these basic steps will always help you to perform better.

You should hit the round rubber center, or the "sweet spot" of the shuttle every single time. You can practice this technique by looking right at the center of the shuttle when you hit an overhead shot you can have a point.

To get a benefit from the speed and height generated by the shuttle, hit it at the top of its arc. This will allow you to shoot a killer overhead and to have more control over the position of the shuttle. Don't wait for the shuttle to come close to you, or it will be losing momentum and height.

Badminton is like squash -- success is all in the footwork. If you're flat-footed on the court, you won't be able to return your shots. Instead, stay on your toes, move your feet up and down as you wait to return a shot, and move your feet back and forth and side to side in tiny motions to position yourself to return the shot. Don't be lazy and reach out your hand too wide to try to return the shuttle -- instead, make tiny movements with your feet until the shuttle is in perfect position.

Whether you're playing singles or doubles, the short serve will catch your opponent off guard. He won't be expecting it, and may not be able to run up to return the serve in time. To hit the short serve, you shouldn't just hit the shuttle really lightly, or it will fall on your side of the court. Instead, hit it at a higher contact point and drop it closer to the racket instead of in front of the racket. To hit a longer serve, let the shuttle fall in front of you as you swing your racket further back almost to your shoulder level so you generate more momentum before you swing forward and hit the shuttle.

When you're playing a new opponent, whether it's at a competition or during a friendly game at a family outing, you should assess your opponent's game even while you're warming up. You should look for a few main things: if your opponent is more of an aggressive or defensive player, if his forehand or backhand is his dominant shot, and also observe their weaknesses, such as slow footwork or weak drop shot returns, that you can exploit.

If your opponent hits the shuttle straight at you, hit the shuttle in a different direction instead of hitting it right back at your opponent, where he will expect it to go. This will work especially well if the shuttle has generated a lot of momentum. If you're quick on your feet, you can change the direction of the shuttle and not give your opponent enough time to react to a fast-moving shuttle.

If you like staying near the net, serve short, hit drop shots, and do whatever you can to make sure that your opponent can't hit the shuttle to the back line. If you're more comfortable at the back line, then serve long and hit speedy long shots so your opponent doesn't have a chance to move you toward the net. Make the opponent lose all control as you play your style of game and maximize your strengths.

a. Slice your net shots.

This will make the shuttle spin and fall in an unpredictable direction. To slice your net shot, start the forward motion as you normally would, and then move the racket inward as you slice the racket perpendicular to the center of the birdie. Your opponent will be expecting you to hit the birdie directly forward, while it will actually spin cross court. This will help you too confused your opponent which is beneficial to you.

The same procedure will apply in this t5rick too. To do this, slice the racket, or move it perpendicularly over the center of the shuttle when it's in the air. This will make the shuttle lose much of its momentum and quickly fall on the opponent's side near the net. 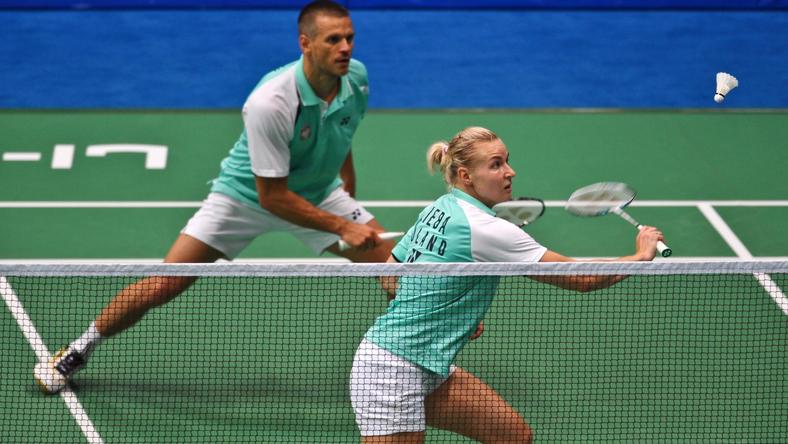 Smashing is when you hit the shuttle with all of your strength at the top of its arc. Aim your free hand up toward the direction of the shuttle for precision, and then swing the racket over your head with the other racket, hitting the center of the birdie and smashing it down into the opponent's court. This is similar to serving in tennis. When you're smashing the shuttle, the aim is just as important as strength. Don't just blindly hit the shuttle as hard as you can -- you should try to aim it either as far away from your opponent as possible or right at your opponent's body so he will be caught off guard.

Once you've mastered the standard smash, you can practice jumping up as you smash the shuttle. This will give you even more momentum and will make the shuttle fall into your opponent's court even faster. Just jump up a foot or two, aiming your chest and body in the direction that you want the shuttle to go, and smash it at the center of its arc. The smash should be used at a time when the shuttle is high in the air and you have plenty of time to approach it should end the point in your favor. If you smash the shuttle at every opportunity, you will tire your arms and will risk smashing it into the net at inopportune moments. So try to use smash not in a frequent manner.

A beginning player is just happy when he hits the shuttle over the net. An advanced player understands that a good game of badminton is like a game of chess -- you should always position your shot wisely so that you move your opponent to the exact place where you want him to be so you can hit the following shot. Always plan your next move and always think one step ahead of your opponent.

When you want to become a professional player so for that you have to need a proper training for this which is only given by professional trainer. You need professional coaches who have experience in coaching and the ability to lead players to the next level. Some important professionals handle the coaching in every aspect of the sport, including footwork, skills, and strategies.

This is the hardest thing which you have to teach yourself “willingness to work, the desire to win”, the hunger to become a champion. Some people call it the “fighting spirit” or “intensity to want to win”. This is one skill that can be very difficult to learn. There can’t be any excuses. The next day after training or games, even if you wake up and feel tired, you have to overcome your fatigue, pain, and any other excuses to continue working. This “intensity” is something you either have or don’t have. Any successful athlete must possess this passion to win, including Michael Phelps, Michael Jordan, LeBron James and Kobe Bryant.

If you carefully read all these points and apply in your daily life so it will definitely help you to become the best badminton player.