When you start to learn about archery then you know there are different styles of archery which is important if you are interested in this.

Target archers shoot at circular targets which are fixed at specifically marked distances. Archers shoot on a level field with their feet or the wheels of their wheelchair on either side of a stationary shooting line. Archers may use longbow, bare bow, recurve, and compound bows in target archery.

When you talk about indoor, target archers compete at a distance of 18 or 25 meters inside a building. Targets are in World Archery colors with a yellow bulls-eye surrounded by rings of red, blue, black, and white. For competition at 18m, targets come in two varieties: a “single spot” at 40 centimeters and a “three spot” which are the same size but with fewer scoring rings.

During the spring and summer, or outdoor season, target archers compete at further distances and shoot outside on a field. Adult men shoot at 30, 50, 70, and 90 meters, while adult women shoot at 30, 50, 60, and 70 meters. Archers in other divisions, such as Junior or Masterclasses, compete at different distances. The same applies to archers with disabilities, although they may also choose to enter simultaneously in the standard divisions.

Field archery features targets set at varying marked distances over rough terrain, often in rural or wooded areas. One of the goals of field archery is to help an archer become more proficient in 3D and target archery by challenging him or her with the unusual terrain.

In this discipline, archers shoot from pegs set in the ground that are painted different colors for the distances appropriate to each division. The most common type of bow used in field archery is the compound bow with a sight and a rear “peep” sight. Recurves and traditional bows are also welcome, and all archers shoot arrows with field tips. Targets may be flat or three-dimensional, set at marked or unmarked distances. In field archery, targets may be arranged on a slope, so the archer must shoot uphill or downhill. Sometimes the angles are steep enough that the archer may do best to kneel on one knee for increased stability.

An outdoor field archery course sanctioned by the NFAA(National Field Archery Association) will have marked yardages for each of the 28 targets, which are divided up into two suites of 14 each. Some courses only have space for 14 targets and so archers will shoot the course twice to make a full round.

A subset of field archery, 3D archery is characterized by its use of life-size three-dimensional animal targets made from foam. The primary goal of shooting 3D is to improve your skills as a hunter, but in recent years the discipline has attracted a growing number of competitive-minded archers who are as interested in shooting good 3D scores as they are in bow hunting.

Because most bow hunters have to guess distances during the hunt, 3D target distances are usually unmarked. Therefore, often one of the most challenging aspects of this type of archery is learning to estimate distance. The targets themselves have a set of scoring rings, with the higher points generally centered over areas such as the heart or lungs. As with field archery, broadheads are not allowed for shooting at foam targets. Also, for the colder months, many 3D groups have an indoor range where they can practice until they can return to their outdoor courses. Many 3D competitions feature a wide range of cash prizes, some as high as several thousand dollars, depending on the resources of the club and the number of entrants into the competition. Traditional archery means different things to different people. For some, it means shooting a longbow or recurve without sights, stabilizers, or other tuning equipment. In this case, many traditional archers choose to shoot with carbon fiber arrows or use a string made from durable synthetic materials. Others feel that to shoot traditionally, you must be shooting bows and arrows made only from natural materials such as wood, horn, and bird feathers. Although most traditional archers shoot bows made using modern techniques, there are other types to admire. Some archers value historical accuracy and prefer bows and arrows crafted using traditional techniques. They also might favor leather and other natural products when choosing armguards, gloves, quivers, and other gear.

Traditional bows may be very simple or very complex. One type of traditional bow is known as the self-bow, which has a stave crafted from a single piece of wood. The self-bow is the oldest type of bow known to man and has been found in many places all over the world. This may be due to the fact that it can be made from many varieties of wood with simple chopping, scraping, and shaving tools in a short period of time. Keep in mind, however, that the quality of self-bows can vary greatly, and when they are allowed to dry out they may become brittle and could splinter or break when drawn.

An example of a more complex traditional bow would be a composite recurve like those made famous by the Mongolian armies of Emperor Genghis Khan. Also used in flight or long-distance shooting by Turkish archers of the Ottoman Empire, this type of bow stave has a unique C-shape when unstrung. It consists of three main parts bound together by animal glue: a wooden core, a layer of a horn on the side facing the archer, and a layer of sinew on the back. 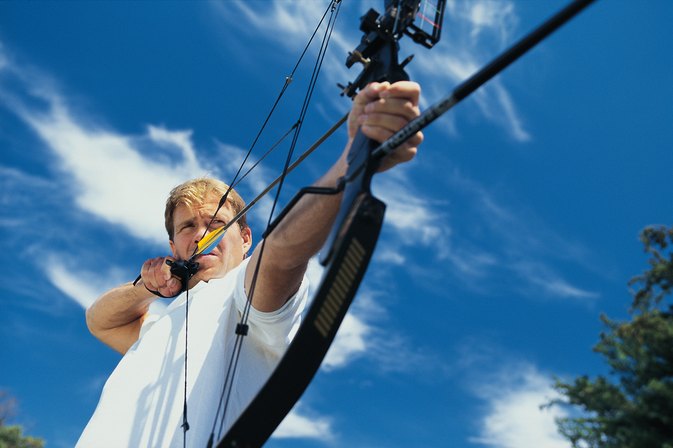 Bow hunting consists of harvesting game animals using a bow and arrow. It is the oldest style of archery, as well as one of the most ancient methods of hunting. Although many modern hunters may use state-of-the-art equipment, some also hunt with traditional bows and aiming methods. Many people who want to hunt are drawn to bow hunting because they feel it requires more skill than hunting with a rifle. As in field archery, the bow hunter may simply enjoy the beauty of nature or the solitude of wooded areas. Whatever their reasons, bow hunters face challenges and enjoy benefits which are unique to this form of archery.

Bow hunting requires a state-issued license and is allowed only during certain seasons. These typically start in September or early October and can span a few weeks or over four months. Bow hunting seasons are typically longer than gun hunting seasons because the harvesting, or success rate, is much lower for archers than for rifle shooters.